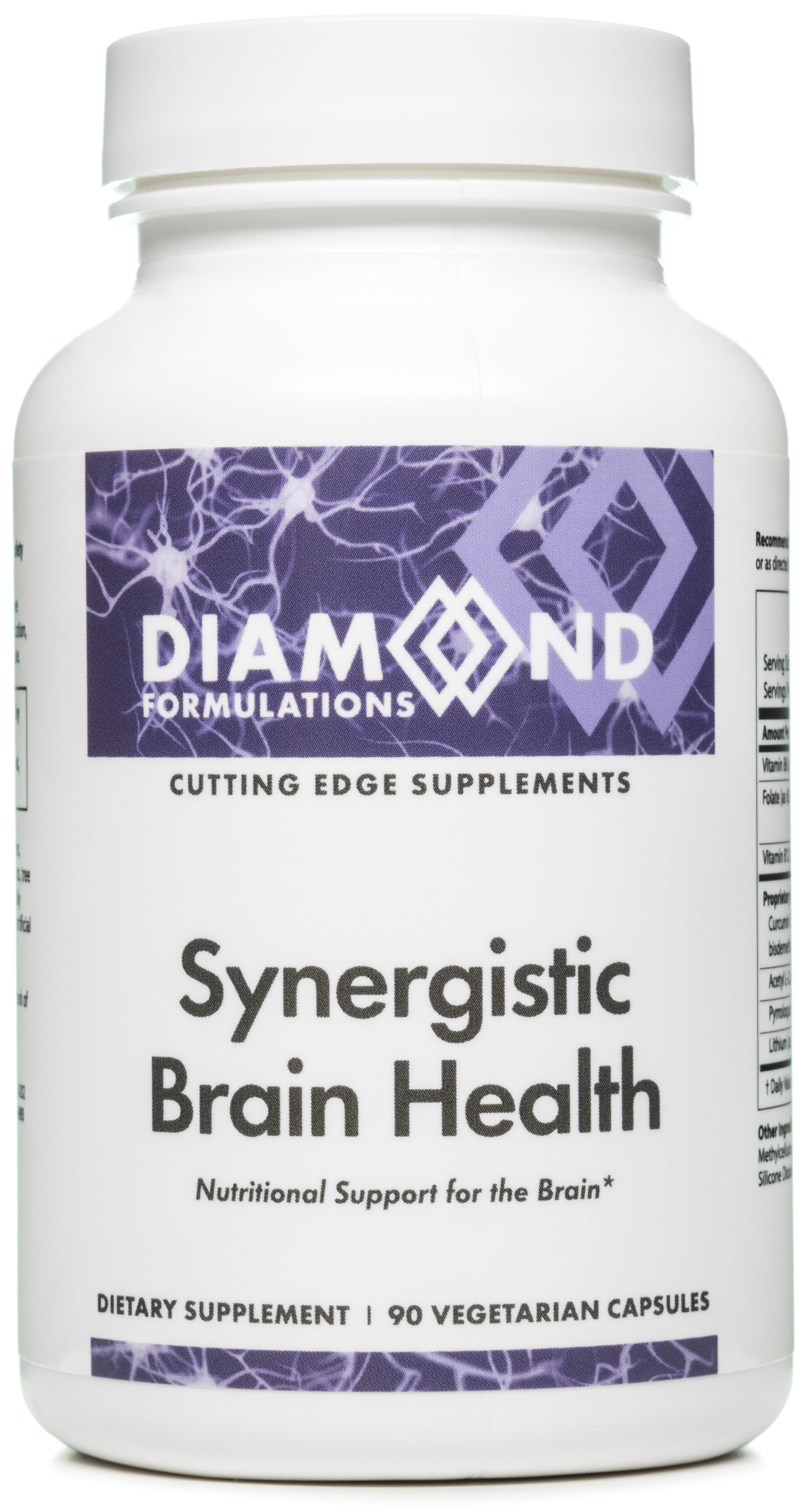 Key ingredients support proper function of the mitochondria, often referred to as cellular powerhouses. Crucial to the regulation of metabolic activity and cellular energy production, mitochondrial dysfunction is associated with aging and progressive cognitive decline.

Curcumin C3 Complex: Well known for its powerful anti-inflammatory and oxidative stress-fighting properties, curcumin has shown an ability to cross the blood brain barrier to impart protective benefits for brain health. Recent studies have found that curcumin inhibits free radical formation, protects neurons and brain cells from damaging inflammation and aids the immune system in the clearance of amyloid plaques, seen as a factor in progressive neurogenerative diseases. As well, curcumin has been found to bind with heavy metals, helping to mitigate neurotoxicity implicated in amyloid precursor protein plaque formation.

PQQ (Pyrroloquinoline quinone): An essential nutrient for growth and development, PQQ has been shown to be a critical cofactor in neurogenesis, the creation of new brain cells and neurons. PQQ may aid the formation of new neurons by enhancing nerve growth factor (NGF) production, important for maintaining neuroplasticity. As an effective antioxidant protecting mitochondria against oxidative stress, PQQ appears to heighten mitochondrial and neuronal function, maintaining energy production necessary for peak performance.

Acetyl L-Carnitine (ALC): Naturally present in body and brain tissue, ALC has documented therapeutic neuroprotective effects. ALC helps protect the brain from oxidative damage, supports mitochondrial energy production and acts as a cofactor for the synthesis of neurotransmitters that play crucial roles in learning, focus and memory. There is compelling evidence that ALC may improve cognitive function in individuals with mild cognitive impairment. While more research is needed, early studies support ALC’s role in maintaining cognitive function and memory by helping to reduce buildup of amyloid plaques, slowing the rate of deterioration and decline of cognitive functions in the aging brain.

Lithium Orotate: Well known for its therapeutic mood stabilizing properties, a growing body of evidence suggests that lithium may have neurotropic and neuroprotective benefits. Lithium orotate may play a role in oxidative stress and inflammation modulation, as well as the up-regulation of mitochondrial function. Lithium may also upregulate neurotrophins, including brain-derived neurotrophic factor (BNDF) and nerve-growth factor (NGF), proteins that regulate the development, function and survival of neurons.

Vitamin B6 (as Pyridoxine Hydrochloride): Widely studied for disease prevention, B6 plays essential roles in proper brain and nervous system functioning. B6 is necessary for immune function, neurotransmitter synthesis, brain glucose regulation and the maintenance of normal homocysteine levels. Elevated levels of homocysteine are associated with cardiovascular and cerebrovascular disease, higher incidences of dementia, Alzheimer’s disease and progressive cognitive decline, as well as brain atrophy in older individuals. High levels of homocysteine are also linked to increased oxidative stress, DNA damage, cell death and excitotoxicity. Excitotoxicity, a pathological process during which neurons are damaged and destroyed by overactivation of excitatory neurotransmitter receptors, is associated with stroke and neurodegenerative diseases.

Vitamin B9 (Folate as 5-Methyltetrahydrofolate):This metabolically active form of folate efficiently supports DNA biosynthesis, homocysteine metabolism and nervous system function. Along with other B vitamins, B9 is critical for neurotransmitter production and may benefit cognitive performance by lowering inflammation and reducing homocysteine, elevations of which are linked to degenerative brain disorders. The only form of vitamin B9 shown to cross the blood brain barrier, growing evidence supports the beneficial role of folate in the aging brain, especially mood and cognitive function.

B12 (Methylcobalamin):B12 iscritical for normal brain and nervous system function, neurological health, and neurotransmitter synthesis. As B12 deficiency is associated with cognitive dysfunction and memory loss, B12 may also have a role in the maintenance of cognitive function. Along with folate and B6, vitamin B12 helps to lower homocysteine levels and reduce inflammation consistently associated with dementia risk. As changes in cognitive function can occur slowly over time, some evidence suggests that sufficient intake of B12 over the long term may help to slow the progression of cognitive decline, as well as the rate of brain atrophy, in those with mild cognitive impairment and high baseline homocysteine levels.

These statements have not been evaluated by the Food and Drug Administration. This product is not intended to diagnose, treat, cure or prevent any disease.